The things that separates a fun role playing game from a night of complicated nerd Yahtzee are the characters you play. Making a fun and memorable character is only slightly complicated, so I am going to give you some sage advice, as well as some internet tools, to make it quick and easy to do. 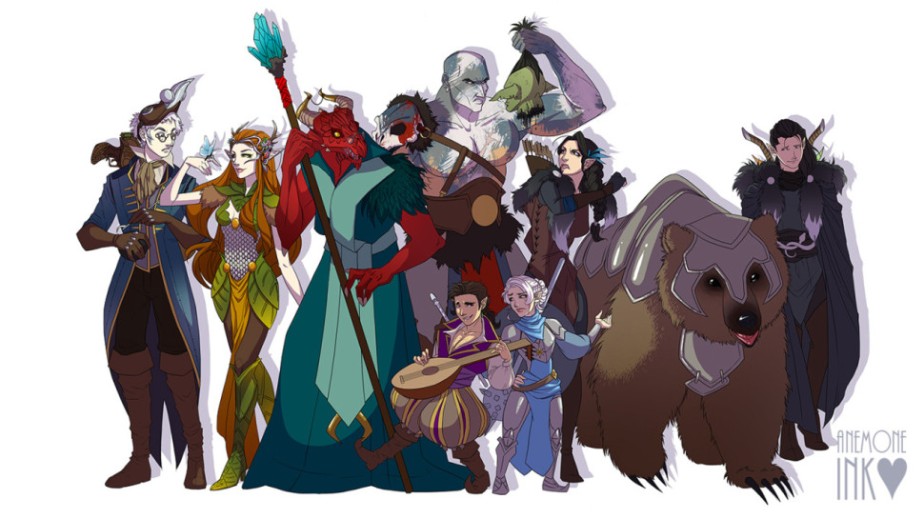 First Things First: Figure out what your characters motivation is
Its one thing to pick their race and class (which we will get to in a little bit) but those are just parts of who your character really is, and what makes them fun and interesting.

It’s not important to have your characters entire life story mapped out, but you should have some idea about who they are before we start the campaign, as it will shape the choices you make and how you go about making them.

I am assuming that Josh and Brent will probably want to reprise some form of their previous characters- A Dragonborn Barbarian who prefers to be lathered in oil prior to a fight, and a half-elf bard, but the rest of you may want to create something entirely new.

What we are looking for is the driving reason behind why your character is running around in dungeons and fighting goblins, instead of just going to school, working 9-5 and putting a bit away in a 401k.

To help, here are some simple cheats to figure out the why

This can be a lot of fun. If you don’t feel comfortable being too creative right away, think of about one your favorite characters from any other media- a tv show, movie, book, whatever, and play as that person. Obviously any sort of adventure or action media will be easy to transfer, but, honestly, it would be a lot of fun to play a character from a not-so-similar program. Imagine Dwight from the Office as a wizard, and you’ll get the idea.

Idea #2- Just use this website.
To begin, your character just needs a dash of background and a big personality. The random character generator over at “Who the #$%& is my dnd character.com provides all that for you. click if a few times and take the best one, or combine ideas. My First one was ” A FUCKING GRUFF DWARF BARD FROM A HASTILY ERECTED TENT CITY WHO KEEPS A BLACKLIST”. Solid gold.

Now that you have a basic idea of your character, its time to flesh ’em out

This is the most complicated part of building a character. It is important to understand how these scores work, but we can learn as we go.  Don’t worry if you don’t understand it all right away. In fact, at the very end, I have a link that will fill out all your ability score information on your character sheet for you!

Your character has six basic scores that determine how good they are at nearly everything. The categories are:
Strength
Dexterity
Constitution (this will determine your hit points, among other things)
Inteligence
Wisdom
Charisma

Your score for each of these six is always a number between 1-20.  To start out, we will be using a simple spread: You will take these six #s (15, 14, 13, 12, 10, 8) and then assign one to each of those abilities. The higher the number, the better you will be at things relating to that skill.
Certain skills are going to be more important for a particular class than others- for example barbarians probably want a lot of strength and constitution, but wisdom doesn’t need to be high. A bard will be dripping in Charisma, but probably doesn’t need much strength, etc.

Picking which order to rank your scores is tricky, so what I suggest you do is, after reading the rest of this, go back and click the link attached to your class. That link it will suggest the order with which to put your abilities, and suggest your first level spells and other helpful information. ALSO READ THE PLAYERS HANDBOOK

If you are still confused, don’t worry. I can help you out if you need it.

Your Class in an RPG is your calling- it is the basic archetype of your character.
There are 12 classes. I’m going to break them down into 3 groups, and link each one with a “Geek and Sundry” blog post to help you determine how to build out that class. Please read through the rest of this post, however, before following the link. Each class does have multiple variations, so I  recommend reading the players manual section for that class so you know what path you want to take.

Before reading them all, you follow this flow chart and have your class determined for you!
Magic Users:
1- Wizard:   A wizard isn’t born with magic in D&D, they earn it through years of hard work, research and practice. If magic users were kids at school, wizards are the kids that study 15 hours a night and are always top of the class. Think Hermione Granger.
2- Warlock: Warlocks took a shortcut to magic powers: they got their abilities by having forged a Pact with a magical entity, good or bad, and they have to keep up their end of that bargain. Think Raven from Teen Titans.
3- Druids: Druids are nature Wizards. they have almost as much magic as a wizard, but they focus on nature and life (and one form of a druid can transform into animals!). Think Nevile Longbottom.
4- Sorcerer: Sorcerers get their magic by being born magic- they can really get some crazy powerful stuff but it can be difficult to control. also, they tend to have parental issues. Think Harry Potter.

COMBAT CLASSES
1: Fighter: It may be a bit basic, but you can modify a fighter for a lot of different purposes. they are the one size fits all combat class. Think Buffy The Vampire Slayer
2: Barbarian. If your problem with being a fighter is that there is too much armor and not enough rage, this is your class. Think Conan, obvi.
3: Monk: An odd thought as a combat class, but these are more the Shaolin variety. They can be armed or unarmed, and even something like an Air bender. If you want to build a ninja, this is where you stark.  Think Morgan from Walking Dead.
4- Rogue: Sneaky, Sneaky. Can be tweaked to be more of your classic thief or assassin, but also think Han Solo.

HYBRID CLASSES
1: Bard– Bards are generally considered a “support” class. While a lot of fun to play, the are not the type to deal a lot of heavy damage themselves. Most of what they can do helps other team members be better, though, and they come with a musical instrument!
2: Ranger: Your classic “Bow User”, rangers are survivalists and specialize in monster killing. Think Legolas.
3: Paladin: A Paladin is a knight. Basically, they use their faith to make them a heavily armored fighter, so they can take a lot of damage, and then dish it right back out. Think the X-Man Colossus, only also a religious fundamentalist.
4: Cleric: The are “priestly champions who wield divine magic in service of a higher power” There are a lot of variations to a cleric, including a powerful party healer, which is always a nice thing to have around. You can also be a War Cleric, or a Trickery Cleric, which just sounds amazing.

That is a lot of info. but hopefully one or more of those appealed to you.

Race is the shiny new paint job on your great new character.
We’re using a classic fantasy set of races, so most of these should be somewhat familiar. Each does come with some small bonuses’ to particular abilities, so it can help you max out a character, but race doesn’t have to be a deal breaker. it can sometimes be fun to play a character who is an ‘unconventional’ build. After all, elven rangers are a dime a dozen, but when was the last time you saw a Half-Orc bard or a gnome barbarian?

Common Races:
Human: Pretty obvious. very versatile. They get a +1 to every stat.
Elf: You probably have a good idea on this one, too.
Dwarf: Elves and Dwarves in D&D are essentially Lord of the Rings versions.
Halfling– A hobbit.  Everybody seems to like them.

Uncommon Races
Half-Elf: Half Elf, Half Human. born of two words type angst.
Half-Orc: Like the half elf, only a lot less good looking. Also Strong. town folk will cross the street to avoid you.
Dragonborn: A walking Talking Dragon Thing. Generally met with a lot of caution and wariness outside of large cities.
Gnome: a very tiny little fella, exceptionally good at tinkering with stuff. uncommon but not considered odd.
Tiefling: Looks like a demon because it IS part demon. townfolk will make the sign of the cross and generally fear you.

****That is the common races, if you REALLY want to be something else, there are some other options, but I want you to talk to me first, because you’re going to need help building it*****

Now as promised. This nerd has done all the hard work for you!

Here he has created a pre-made character sheet for every combination of Race and Class, and he uses the standard ability scores I wrote earlier. All you have to do is click it and print it! it also has a ton of background stuff you don’t need, but its entirely editable.

IF you want to build your own from the ground up, but hate the maths, he has a template for that too. right here

Ok that’s all for now!
When you’ve crafted your character, please email me a copy of your character sheet, at derekwarnken@gmail.com

Here are some places around the web worth looking at, or some links to things I may mention in other posts so its easy to find again.